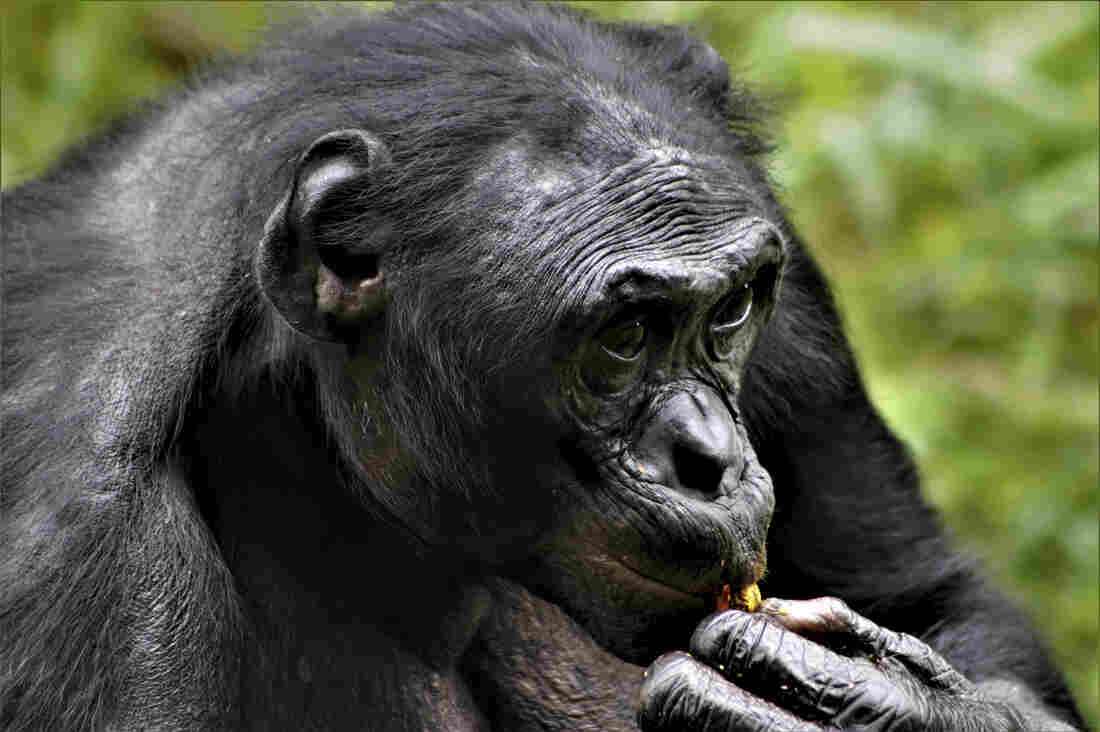 Researchers have observed that the friendliest male bonobos, like this male resident of Lola Ya Bonobo sanctuary in the Democratic Republic of the Congo, tend to be the most successful. Early humans may have had the same experience with their peers. 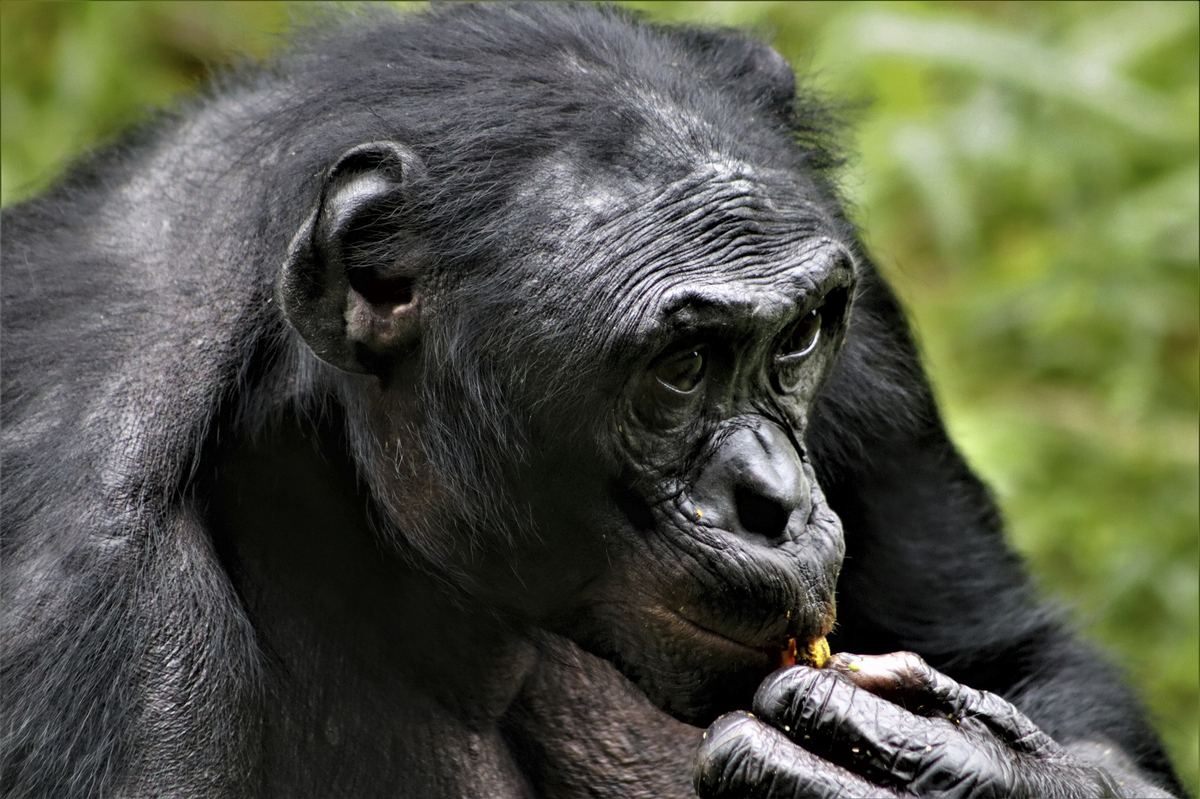 Researchers have observed that the friendliest male bonobos, like this male resident of Lola Ya Bonobo sanctuary in the Democratic Republic of the Congo, tend to be the most successful. Early humans may have had the same experience with their peers.

In 1959, Dmitri Belyaev made his way to Siberia to look for the most polite foxes he could find.

A Soviet geneticist, Belyaev was interested in how animal domestication occurs — and in what happens biologically when the wild canine evolves into the mild-mannered dog. The thousands of fox fur farms stippling the Siberian countryside at the time were ideal grounds for his experiment.

Belyaev started breeding especially docile foxes and observing the temperament of their pups. Within just three generations they were noticeably less fearful and aggressive toward people. By the fourth generation some pups would even approach their captors, wagging their tails like giddy retrievers. The animals were showing signs of friendliness toward humans. They’d been domesticated.

While Belyaev’s foxes underwent artificial evolution through breeding, Hare and others believe that in Homo sapiens natural selection favored friendliness — that without realizing it we were self-domesticated by our own evolution, and that our more agreeable demeanor is responsible for our success and propagation across the planet.

In his new book, Survival of the Friendliest: Understanding Our Origins and Rediscovering Our Common Humanity, Hare presents a thesis on why being more cooperative with those around us, and more willing to compromise, may have conferred survival advantages. Violence and aggression, he writes, wasn’t always a sound evolutionary strategy. Being the alpha bully means you’re more often engaged in dangerous encounters, and a target of the greater group, in whose best interest it is to weed out threatening, socially destabilizing males.

“When you look back in nature and see when a species or group of species underwent a major transition or succeeded in a new way, friendliness or an increase in cooperation are typically part of that story,” says Hare. He cites the evolution of flowering plants, which evolved over 100 million years ago out of cooperation with pollinators. Dogs too were domesticated as amicability became adaptive. Wolves friendlier toward humans would’ve had a more reliable food source and a better chance of living on.

A major social milestone for humans was the cognitive revolution that took place between 40,000 and 90,000 years ago, when our creativity exploded into a gallery of tools, weapons, carvings, and cave drawings. Cooperation meant skills and knowledge could spread within and between groups of our hunter-gatherer ancestors like never before.

Human domestication has provoked scientists plenty of times before, with some claiming it’s bringing us down as a species, leaving us weak and dependent like other domesticated animals. Darwin observed that domesticated animals share certain traits across species. Domesticates tend to have floppier ears than their wild counterparts, and curlier tails. They’re smaller and have recessed jaws and littler teeth. Domestication also shrinks the amygdala, the brain’s fear center, leading to a reduction in aggressive, fearful reactions.

Belyaev noticed that his domesticated foxes eventually developed black and white, or piebald, spots, now known to be a classic sign of domestication. Think of the black and white pelts of cows, horses, dogs, and cats – especially those white-footed felines we claim “wear socks.”

The thing is, with the exception of docility, these characteristics don’t do anything at all.

Research like Belyaev’s made it apparent that if you select for friendliness and cooperation in foxes, you get a host of features that come along for the ride that don’t serve a purpose – in evolutionary parlance they’re non-adaptive, much like the male nipple. Together this suite of traits is called the “domestication syndrome.”

For years scientists have recognized that domestication seems to preserve childlike psychological and physical tendencies, especially those that elicit care from parents and other adults. “Cuter” features. A little more helplessness. And friendliness towards humans, supporting Hare’s argument. Recent science has helped piece together why this is.

During vertebrate development there is a strip of what are called neural crest cells running down the back of the embryo. As we grow inside the womb, these cells migrate throughout the body to help form the cartilage and bone of our face and jaw, the melanin-producing cells that give our skin pigment, and part of our peripheral nervous system. They also form our adrenal glands, which, among other functions, release cortisol — our “stress hormone” — and adrenaline, involved in our fight or flight response.

But fewer neural crest cells reaching their intended targets also influences the other traits driven by their voyage through the body, explaining the smaller snouts and jaws seen in domesticates, and white patches of fur lacking melanin. Scientists now know that domestication — whether artificial or natural — seems to involve selection on a gene called BAZ1B, which helps drive neural crest migration during development.

In recent years, the self-domestication theory is perhaps most associated with Harvard anthropologist Richard Wrangham. He was Hare’s graduate adviser, and the two of them have long collaborated to study how domestication occurred in certain species, including traveling to Siberia together to study Belyaev’s foxes (the experiment is still ongoing some 60 years later despite Belyaev’s death in 1985).

In the late 1990s, writings by Belyaev’s longtime collaborator Lyudmila Trut got Wrangham thinking that the story of the Russian foxes might shed light on primate domestication, specifically that of bonobos.

Bonobos and chimpanzees are our closest cousins. Yet whereas chimps are often violent buffoons, bonobos live a more peaceful existence, with females wielding the social power. Like humans, male bonobos can be plenty violent, but the females band together to keep the overly aggressive fellows in check. Unlike chimps, bonobos don’t murder members of their own species. They also have lots of sex, earning them their free-love reputation.

“I started thinking of self-domestication as being the best way to think about selection against aggression in bonobos,” says Wrangham. And this, both he and Hare believe, was due to where the respective species lived.

Chimps evolved in African regions scarcer in food, where they had to compete with gorillas for their spoils. Bonobos evolved in the lush Congo basin. 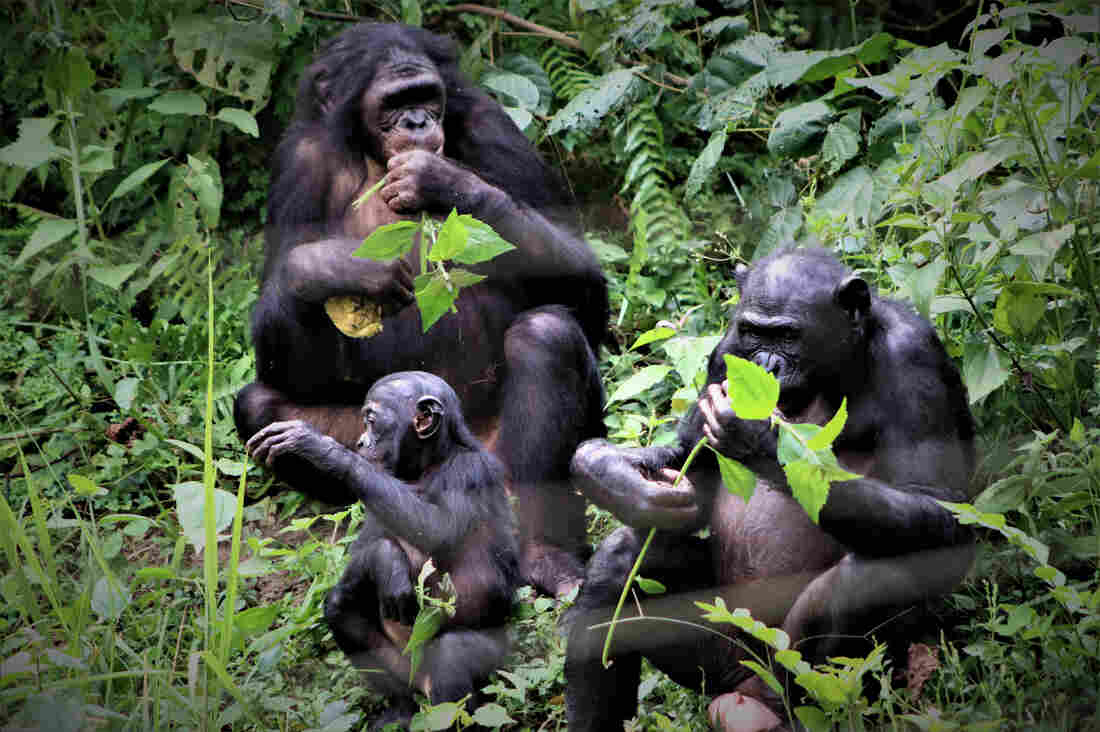 A bonobo family eats together in the Lola Ya Bonobo sanctuary in the Democratic Republic of the Congo.

Hare explains that while despotism and aggression can be evolutionarily advantageous when times are tough, a hierarchical structure in which only a few individuals in a group get most of the resources and reproductive opportunity can be extremely costly. Chimpanzee and baboon data suggest as much.

If for whatever reason a new or abundant resource becomes available, the benefits of aggression no longer pay off.

Following his bonobo revelation, Wrangham took the idea a step further, applying the same theory to humans: “Since I was already aware of some parallels between bonobo and human features, human self-domestication therefore became a fascinating possibility.”

It appears that the friendliest bonobo males were the ones who succeeded. Hare thinks that we share a similar past, in which a new ecological situation in our evolution — perhaps finding ourselves in a region with more abundant fruits and fauna — changed the calculus of our social interaction in favor of cooperation.

It’s true, humans are far more cooperative than most other species. Yet how do we then reckon with our capacity for brutalities like murder, genocide, and slavery?

As we became more social and cooperative with each other, we began to strongly identify with our community. In turn we were left more suspicious of others — anyone outside of our circle of family and friends.

“There are two ways to make a group,” says Emiliano Bruner, a paleoneuroscientist at the National Research Center for Human Evolution in Burgos, Spain. “First, you can rely on what people have in common, giving importance to similarities. Alternatively, you can stress the differences toward another group. Both strategies can work, but in the first case you bet on love, which is often difficult, because it requires the acceptance of our differences. In the second case, you bet on hate which is, unfortunately, much easier to do!”

Self-domestication brought cohesion within our in-groups as psychologists put it — we got tighter with our cliques. But it also brought with it a deeper sense of xenophobia. “Union is often based on hate toward somebody, in the name of differences in ideology, sex, race, politics, or whatever excuse one wants to find,” says Bruner. “A social species is, in this sense, easy to manipulate. Individuals need to feel they belong to a group, and they are ready to do any foolish thing to reach that affiliation. So often humans are afraid of loneliness.”

Prejudice is toxic, and sadly humans are stuck with it. But according to Hare, our willingness to harm and exploit members of our own species is rooted in far deeper psychic caverns than simply not liking them. Instead it comes from not seeing them as humans in the first place.

Our capacity to dehumanize is perhaps the darkest Homo sapiens quality. We instinctually blind ourselves to the humanity of those we fear, or those we can exploit. “There’s a network in the brain that may dampen empathy and no longer calculate what those who threaten our own group are thinking–you don’t necessarily perceive those individuals as fully human,” Hare speculates, citing neuroscience research that supports his view. “You’re using cognition you might use when you interact with a table or a chair, which allows for moral exclusion.”

If the theory holds, it may explain why warfare, enslavement, and other human atrocities arose alongside increasingly cooperative civilizations beginning around 11,000 years ago, following the agricultural revolution.

Hare feels that by explaining our social ills through prejudice, we may be focusing on the wrong problem. Psychologists, neuroscientists, and politicians might find more success trying to short-circuit brain mechanisms that allow for dehumanization. He believes doing so could even help assuage our country’s stifling political polarization.

Hare didn’t devise the concept of human self-domestication on his own. His ideas are built on those of Wrangham and other academics in the field.

But, as Wrangham recalls, Hare’s work with the Russian foxes, and later dogs and bonobos, did add a great deal of credibility to the idea that a new, agreeable human psychology was the result of natural selection for being less aggressive and friendlier to our peers, and perhaps more aggressive to outsiders.

“I wanted to tie everything together really tightly first,” says Wrangham on presenting the idea to the public. “Brian’s been pushing it faster than I wanted to go!”

Bret Stetka is a writer based in New York and an editorial director at Medscape. His work has appeared in Wired, Scientific American, and on The Atlantic.com. His forthcoming book, A History of the Human Brain, will be out on Timber Press in March 2021. He’s also on Twitter: @BretStetka.