Short people may face a greater risk of catching coronavirus because of how droplets fall to the ground, a study has claimed.

Researchers in Singapore measured the way Covid-19 travels after its expelled by an infected person keeping two metres apart from others.

They found after the initial blast of a sneeze or cough, the viral particles briefly linger in the air and fall slowly to the ground.

The academics said the downwards trajectory put shorter people at greater risk of inhaling the droplets compared to taller people.

They have suggested teenagers, women and anyone under 5ft 5 keep more than two metres away from others. The two metre rule is what the UK Government advises.  For comparison, the average height of a woman in the UK is 5ft 3 and for a man it is 5ft 9.

However, the study was done using animations on a computer model so it did not reflect a real life scenario.

The research also indicates that children should be at a greater risk – but a wealth of studies have shown primary school-aged children are less likely to catch the disease than adults. Experts believe this is a genetic benefit which may be linked to fewer receptors that Covid-19 uses to enter human cells.

Teenagers in secondary school, on the other hand, appear just as likely as adults to catch and spread Covid-19, which has raised fears about keeping them open during the second lockdown in the UK. 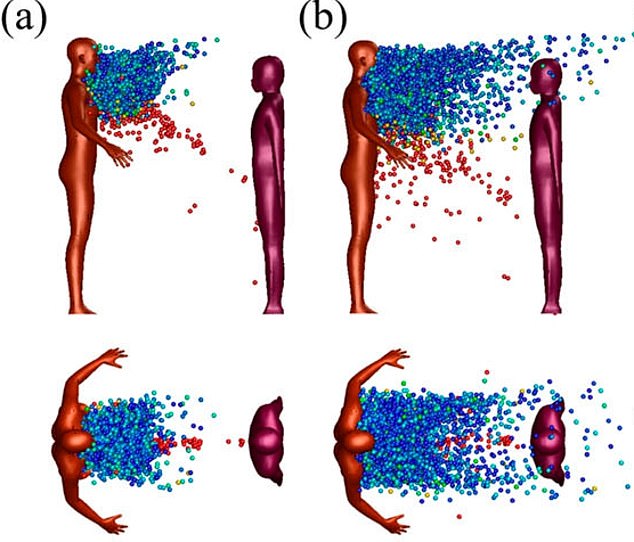 Researchers recreated the trajectory of droplets expelled by a person who coughs outdoors on a computer model. The findings showed larger droplets (in red) fall to the ground quickly due to gravity. They may fall onto the clothes of a person nearby (pictured here). But if someone was short (below 5.2ft) the droplets may land on their upper body or face

The new study, published on Tuesday in the journal Physics of Fluids, was conducted by Singapore’s Agency of Science, Technology and Research.

The researchers wrote: ‘Teenagers and short adults are advised to maintain a social distance greater than two metres from taller persons.

‘Young children may be at greater risk compared to adults based on the typical downward cough trajectory.

‘Surgical masks are known to be effective at trapping large droplets and therefore recommended for use as necessary.’

A typical cough emits thousands of droplets across a wide size range. The larger ones drop quicker than the small ones.

Particles and droplets that result from a human cough or sneeze typically range in size from five to 500 microns. A fine grain of sand is about 100 microns.

The study looked at how droplets disperse in the air under different tropical outdoor environments.

A model simulated what would happen when two people were standing either one (3.3ft) or two metres (6.6ft) apart.

BACK CORNER OF THE CLASSROOM IS SAFEST TO AVOID INFECTION

The back corner of a classroom has long been the domain of mischievous children, but it may also be the safest spot in the room to avoid catching the coronavirus, a US study claimed.

Schools have been hit hard by the pandemic, with many forced to close, cancel exams and overhaul their teaching methods.

And much research has looked at how to minimise the risk to both staff and pupils, with open windows and air conditioning hailed as effective solutions.

Now research backs this up, but also reveals that in a typical classroom the lowest concentration of coronavirus particles is often in the back corners.

Researchers from the University of New Mexico say this information could allow for high-risk students to be placed in the low exposure zones.

In the study, published in the journal Physics of Fluids in October, the scientists used a computer model to see how open windows, perspex screens on each desk and air conditioning impacts the spread of aerosols and droplets.

Khaled Talaat, co-author of the study, told MailOnline that the specific location of a room’s safe zones are dependent on its specific layout and ventilation. But the researchers used industry-standard air conditioning systems and rooms of ‘realistic dimensions and size’, to make the findings as wide-reaching as possible.

The researchers looked at how aerosol particles spread through the air in a classroom following expulsion via talking, coughing, laughing or sneezing.

‘Nearly 70 per cent of exhaled particles smaller than one micrometre in size exit the system when windows are open,’ Mr Talaat says.

‘And air conditioning removes up to 50 per cent of particles released during exhalation and talking, but the rest get deposited onto surfaces within the room and may reenter the air.’

However, while these tried and tested methods were again found to be worth employing, the team also found screens in front of desks were effective.

‘Their effectiveness depends on the position of the source with respect to the air conditioning diffusers.’

They said: ‘Generally, large droplets separate from the turbulent cloud over time due to gravity, whereas small droplets are buoyed by the hot air cloud from the mouth and are transported over a long distance.’

Around 15 per cent of all droplets fall in the ‘wake’, which is an area between the two people and in close proximity around.

Most of the droplets land on the cougher. But some deposit on ‘the lower part’ of the other person.

‘Contamination of his/her clothes or exposed skins may lead to the secondary transmission through face, mouth, or nose touching,’ the paper said.

‘This result highlights potential risk for shorter persons, including children, who are less than one metre away from a cough.’

Considering the ‘listener’ in the simulation is of shorter height (160cm/5.2ft), it would suggest that the droplets would fall onto the upper half of the body of a small child.

But the study did not simulate this.

Overall the study suggested coronavirus-infected cough droplets can travel more than the safe social distance set by health chiefs in the UK of two metres (6.6ft).

Large droplets settled on the ground quickly but could be projected one metre even without wind.

But in climate conditions that are typical for Singapore – wind speeds of two meters per second (4mph) and 30 degrees Celsius (86 degrees Fahrenheit) – large droplets of 1,000 micrometers can reach 1.3m (4ft).

It reinforces the importance of face masks when less than two metres can be kept.

Medium-sized droplets could evaporate into smaller droplets, which can travel further by the wind.

These ‘aerosols’ – extremely small particles – can linger in the air for long periods and are more susceptible to be inhaled deep into the lung, study author Dr Hongying Li said.

The study has some limitations, including that the results are based on simulation models and not a real life situation.

The model is based on assumptions made from existing scientific literature on the viability of the coronavirus virus in certain wind speeds, humidity levels and air temperatures.

But it’s not the first time a computer model has suggested cough droplets can travel further than the ‘safe distance’.

Separate research out of Cyprus that also published in the journal Physics of Fluids found that a light breeze could carry some droplets as far as 18 feet.

Footage of a simulation used by Florida Atlantic University in May showed microscopic particles from a cough can spread up to 12 feet.

Experts conducted an experiment using a mannequin to show how air travels after a ‘light’ and ‘heavy cough’.

Laser lights illuminated how far the gas and the droplets it contained could travel. It also showed these droplets could linger in the air for more than one minute.