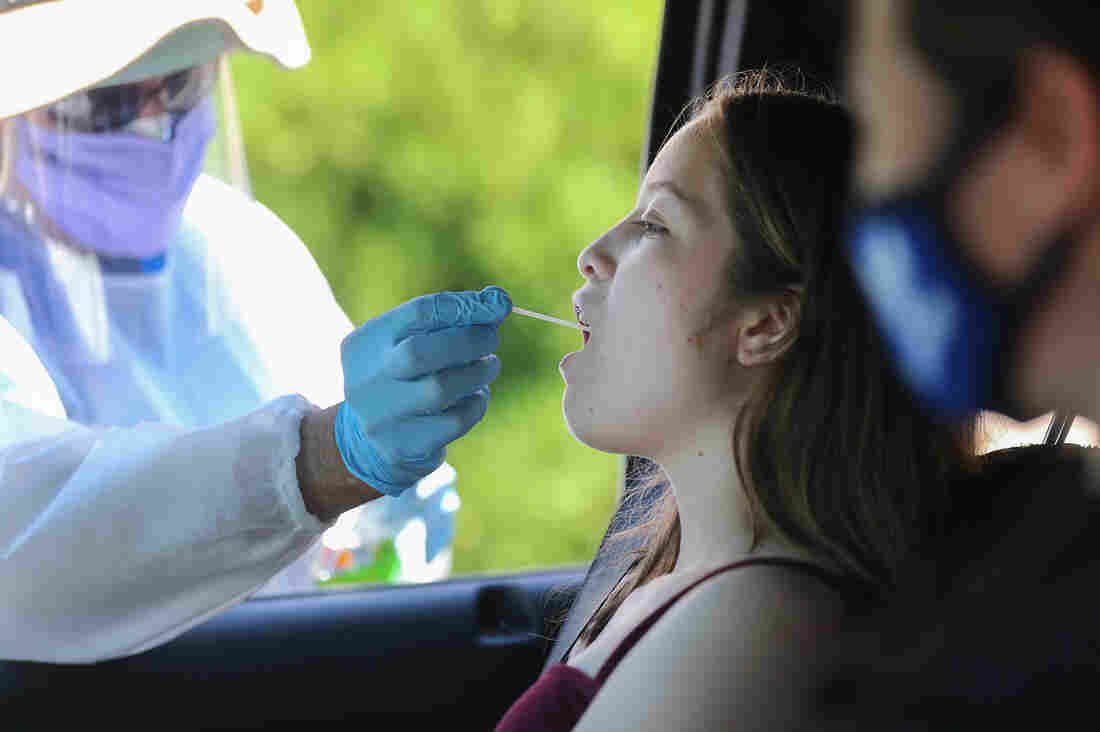 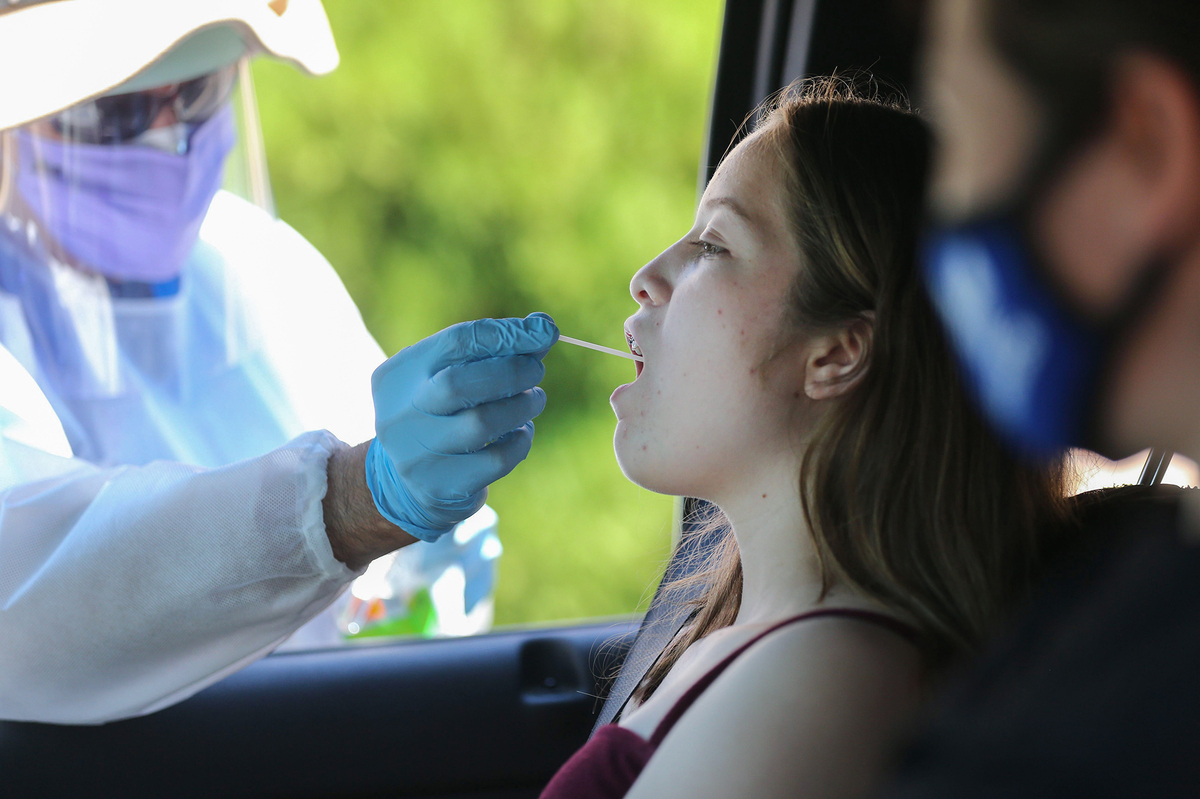 New coronavirus cases in the U.S. reached staggering highs this week, the second week in a row of record-breaking growth. Hospitalizations rose quickly, too, approaching levels that will soon eclipse the spring and summer peaks.

On Wednesday, the country recorded more than 100,000 cases in a single day, a threshold Dr. Anthony Fauci warned lawmakers the U.S. could reach if the virus was not driven down before winter.

“Cases are going up exponentially in many different parts of the country,” says Dr. Albert Ko, professor and department chair of Epidemiology of Microbial Diseases at the Yale School of Public Health.

Ko says it’s not unreasonable to think the daily case count could double again, given the current trajectory of the U.S. outbreak.

The increases cannot be explained by more testing, says Anne Rimoin, professor of epidemiology at the UCLA Fielding School of Public Health and Infectious Disease Division of the Geffen School of Medicine.

“There’s no indication that the number of cases will go down,” she says. “These are true increases; it’s not just due to more testing.”

Testing has increased modestly in the past month but has not surged anywhere near fast enough to explain the case growth. And positivity rates are high in many states, a measure that indicates when there are more infections in the community than are captured by testing.

When infections spike, it often takes several weeks before that is reflected in hospitalizations, and then several more weeks for a corresponding rise in deaths.

As of Thursday, hospitalizations had climbed 14% over the past seven days, according to the COVID Tracking Project. More than 53,000 COVID-19 patients are in the hospital — approaching the spring and summer peaks when about 60,000 people were hospitalized.

“We already have a lot of hospitalizations at this point and I’m worried in the next two or three weeks those could double — it would be devastating for public health,” says Ko.

The Midwest remains in the most precarious situation. It now has more cases per capita than any other region during the pandemic. Cases are rising the fastest in those states, up more than 80% from two weeks ago.

Illinois has added about 50,000 cases over the past week, according to a CDC analysis, outpacing even Texas and California, which have much bigger populations. And hospitalizations are climbing steeply too.

“The rise in cases and hospitalizations is unsustainable,” said Illinois Gov. J.B. Pritzker this week.

In parts of Wisconsin, state health officials say hospitals are nearing or already at capacity. Many have relied on moving patients to different parts of the state, but that is becoming increasingly difficult.

“We are on an island here,” says Dr. William Melms, chief medical officer at the Marshfield Clinic Health System, which runs clinics and nine hospitals primarily in rural parts of Wisconsin. “We will certainly be pushed to the limit by the end of the month.”

While the increase in hospitalizations is most dire in the Midwest, at least 20 states have more than 1,000 people currently hospitalized with COVID-19. Texas leads the country. Some Western states including Colorado and New Mexico have seen record numbers of hospitalized patients.

The situation is projected only to worsen as the weather turns colder and people spend more time indoors and travel for the holidays.

“This is when we have to be actually the most vigilant, because we are getting into a time when respiratory illnesses circulate at a much higher frequency,” says Rachel Graham, assistant professor of epidemiology in the Gillings School of Global Public Health at The University of North Carolina at Chapel Hill.

Improvements in treating COVID-19 patients have helped bring down the death rate so that people who are hospitalized with the illness now have a lower chance of dying compared to earlier in the pandemic.

But a person’s chance of dying from the disease is “still pretty high,” says Rimoin. “It’s higher than most infectious diseases, including influenza,” she says. “Plus, it’s not just about deaths, it’s also about severe disease and disability.”

As hospitals fill up with COVID-19 and influenza patients, state leaders will be forced to confront unpopular decisions about how much to shut down the economy and limit gatherings, says Graham.

“A broad lockdown is effective in certain types of situations,” says Graham, who points to New York City’s success in containing the virus. “It basically enforces compliance, and some places are going to be a lot more willing to and able to take another large lockdown.”

The Northeast is now contending with a huge rebound. Cases have shot up 65% on average over the past 14 days.

Harrowing outbreaks in the spring left an imprint on states like New York, New Jersey and Connecticut.

Albert Ko says that caused people to change their behavior and follow public health guidance, but “this protective effect is now wearing off and people are having increased social contacts.”

As cases have spiked, some states have rolled back their reopening plans or put in place restrictions, including Illinois and Connecticut. But other states like North and South Dakota, which continue to have the highest rate of infections per capita in the country, have resisted taking such steps.

In El Paso, Texas, the decision to lock down fell on local authorities, who were faced with the prospect of their hospitals being overrun.

“This is a hard moment where we don’t necessarily get to have our cake and eat it too. You want to have bars open, then you might not be able to have schools open. You want to not wear a mask, you’re going to see more COVID,” says Rimoin.

There is still an opportunity to level off cases through aggressive public health actions, but day after day of record-setting case increases have already set up the country for a dramatic surge in hospitalizations — which could put severe pressure on health care workers.

“I’m really worried about what’s going to happen in places in the South and the Midwest where they don’t have that strong implementation of the meat and potatoes of what works in public health, facemasks and social distancing,” says Ko.

“The big question is how much damage has already been done?”