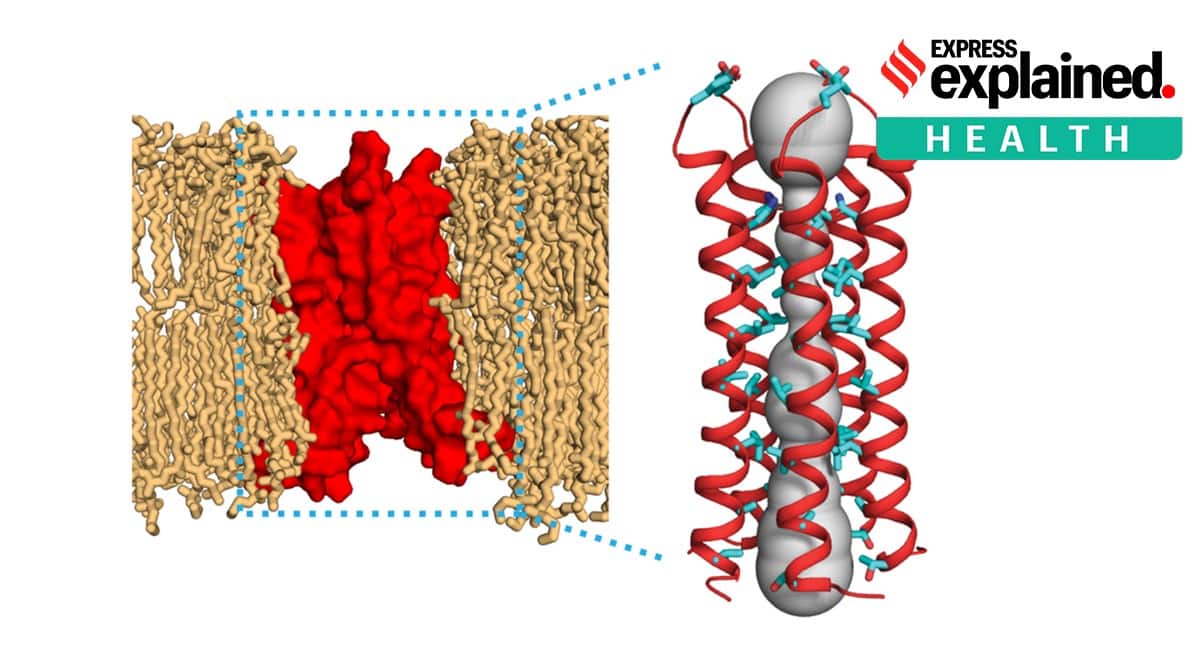 Illustration of SARS-CoV-2’s envelope protein E in a bundle of five helixes, with grey water column inside. (MIT)

Chemists at the Massachusetts Institute of Technology have determined and described the molecular structure of a protein found in SARS-CoV-2, the novel coronavirus that causes Covid-19. They have reported their findings in the journal Nature Structural and Molecular Biology.

The protein, called the envelope protein E, plays a key role in the virus’s ability to replicate itself and stimulate the host cell’s inflammation response. The researchers said that if ways could be devised to block this pathway of the virus, it may help reduce the pathogenicity of the virus and interfere with viral replication.

In the MIT study, the researchers investigated the binding sites of two drugs that block the channel used by the envelope protein E. These drugs bind weakly, however, and they would not be effective inhibitors of the E protein.

The study’s senior author, Mei Hong, has a lab that specialises in studying the structures of proteins embedded in cell membranes. When the pandemic began earlier this year, Hong and her students decided to focus on one of the SARS-CoV-2 proteins, and eventually chose the E protein. It is made of bundles of several helical proteins.

The researchers were able to clone and purify the E protein in two-and-a-half months. They then analysed it with nuclear magnetic resonance (NMR) spectroscopy for two months. They found that the part of the E protein assembles into a bundle of five helices. The helices remain largely immobile within this bundle, creating a tight channel. 📣 Express Explained is now on Telegram

The researchers also found that two drugs — amantadine, used to treat influenza, and hexamethylene amiloride, used to treat high blood pressure — can block the entrance of the E channel. However, these drugs only bind weakly to the E protein. If stronger inhibitors could be developed, they could be potential drug candidates to treat Covid-19, the researchers said.

“Even when the pandemic is over, it is important that our society recognises and remembers that fundamental scientific research into virus proteins or bacterial proteins must continue vigorously, so we can preempt pandemics. The human cost and economic cost of not doing so are just too high,” Hong said in a statement.

For all the latest Explained News, download Indian Express App.